BE A PART IN FIGHT AGAINST COVID-19

Help us serve those who are hungry in this tough situation

To Combat COVID-19 pandemic crisis, the Government of India has taken a strict measure by compulsory lockdown of the entire nation. The ISKCON Food for Life programme, in coordination with local Administration, has stepped in by providing food to thousands of people across the country to mitigate their hardships. All safety and hygiene measures have been adhered while cooking, packaging and distribution of food packets to the people.

With all eateries and other means of food being shut, stranded migrants and underprivileged are starving. Fearing that starvation may kill them before Corona, they find hunger scarier than Corona!
Come, join hands with ISKCON in comforting the scared migrants and the underprivileged street dwellers by offering them a meal to strengthen them to fight the dreaded enemy Corona.

WHAT OUR PRIME MINISTER HAS TO SAY 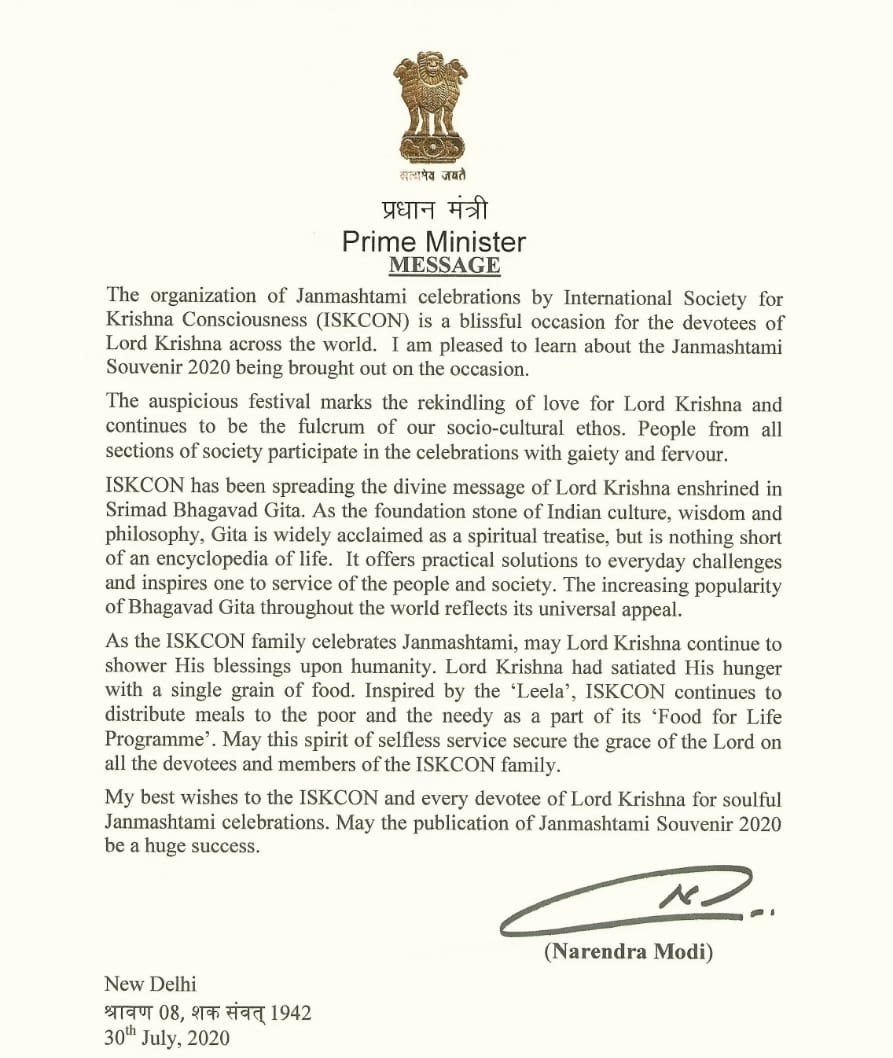 The history of ISKCON Food Relief Foundation starts with a story of compassion. Looking out of a window one day in Mayapur, a village near Calcutta, His Divine Grace A.C Bhaktivedanta Swami Prabhupada saw a group of children fighting with street dogs over scraps of food. From this simple, yet heart breaking incident, came the determination that: No one within a ten mile radius of our center should go hungry.

It is his inspiration which helped us to create The ISKCON Food Relief Foundation as it is today.”

ISKCON Food Relief Foundation (IFRF) believes in providing prasadam with the right nutrition. IFRF program is based on the belief that ‘you are what you eat’.

The Sanskrit word annadānam literally means the offering or sharing (dānam) of food (annam). In every ethnic and religious community across the Indian subcontinent, no festival or ceremony is complete without annadānam, or at least with the distribution of prasādam.

Accordingly, the importance of food is stressed in ancient scriptures, including the Vedas, Upanisads, Dharma Sastras, DhammaPāda, etc. Taittiriya Upanishad declares, ‘All life force comes from food.’ (annamvaiprānah) and ‘Let food be produced in plenty’ (annambahukurveet).

"All living bodies subsist on food grains, which are produced from rains. Rains are produced by performance of yajna [sacrifice], and yajna is born of prescribed duties."

"Donating 1000 elephants & horses, donating 10 million cows, donating any number of vessels of silver and gold, donating the entire land till sea, offering the entire services of the clan, helping in the marriage of 10 million women, all this is never ever equal to Annadanam, the feeding of hungry and needy."

How I can Help

In ISKCON Warangal, prasadam distribution is an activity, which goes on regularly, inside and outside the temple premises. These prasada meals are distributed to visitors, temple devotees and underprivileged during several festivals, as part of Food For Life initiative during weekends, special festivals and many other occasions.

Donate towards Food For Life.

Donation towards AnnadanaSeva is exempt from income tax under section 80G.

We conduct Food For Life program with this very principle in mind, for among the hungry crowd there may also be an anonymous genuine devotee, saint or even a Devata.

ISKCON is a world wide organization founded by His Divine Grace Abhayacharanarvind Bhakti Vedata Swami Prabhupad in 1966. It is a spiritual organization meant to uplift people in values and consciousness. Currently it has more than 700 centers all over the world

Attend us and be inspired

join with us and feel the happiness within